Despite its grand scale, 5400 has always been a place filled with the sound of children and visitors.  Since 1900 four primary families have resided in the house.  The first two, the Harwoods and Courtneys, lived there 63 years.  The last, the Wrays, left in the 1990s. After that, the structure become a boarding house with non-resident owners and began to deteriorate.  In 2005 Newport News historian Mary Kayaselcuk acquired the dilapidated property with the intent of restoring and gifting it to the city.  The city accepted 5400 into its historic house inventory in 2015.​ 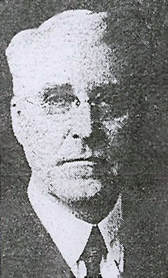 Washington William Harwood. Daily Press
In 1887 W.W. Harwood and his wife Montague came to the southern end of Warwick County to engage in the buildup of the port town being created by railroad and shipping magnate Collis Huntington.  Both played important roles in the development of Newport News at the turn of the century.  Within a decade of the town’s establishment, persons of means were seeking to escape the resultant urban congestion by moving into the countryside.  The Harwoods followed this trend.  In 1900 they purchased Ward 4, Block 601, Lots 24-28 from the Old Dominion Land Company on which to build a commodious estate for their golden years.  At the time, the property was four blocks outside the city limits in the new, fashionable suburb of North End. 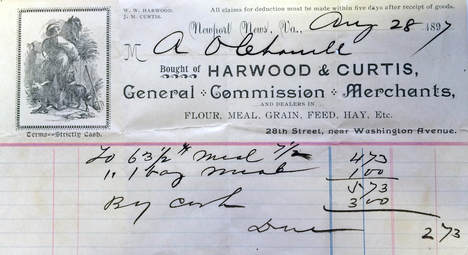 Invoices from Harwood & Curtis, general commission merchants and dealers in flour, meal, grain, hay, feed, etc., dated August 28, 1897 and July 26, 1900. First located on 28th Street near Washington Avenue, the firm moved to 23rd Street to be near the C&O Railway tracks. The busy scene at the warehouse depicts several horse drawn wagons being loaded with supplies and a steam engine belching alongside it. Tidewater Genealogical Society
Washington William Harwood (1853-1932)
A native of upper Warwick County and pioneer city businessman, he and his partner James M. Curtis (future city treasurer) wholesaled groceries and feed.  By 1896, he had acquired Curtis’ holdings and continued as active head of the firm until his 1918 retirement.  In addition, he was a director and board chairman of the Citizens & Marine Bank and a city councilman for several terms.  He died suddenly of unknown causes on the front porch of 5400 in 1932.  Such was his esteem that at his funeral, the list of active and honorary pallbearers (numbering 36) read like a Who’s Who of local luminaries.  His service was held in the house and presided over by ministers of two denominations. 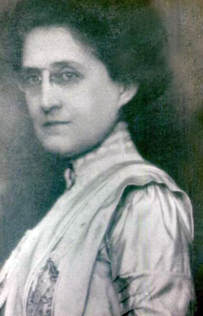 Montague Weisiger Harwood. Newport News Woman’s Club
Montague Weisiger Harwood (1857-1943)
The daughter of an Amelia County judge, she contributed to the city in her own right.  From 1890-1894 she served as principal of the 28th St. School; the city’s first public school.  In 1894, she established the Newport News Female Seminary on 29th Street.  The private academy included among its students older girls, many of who came from outside Virginia.  Of significance is the fact that Mrs. Harwood built and owned the school.  She, her husband and daughter Julia resided there for a number of years before moving to 5400.  She also was the first president of the Newport News Woman’s Club and involved with numerous cultural, civic, religious and social concerns.  In her last years, she suffered from a respiratory ailment, prompting Julia to place her mother in a nearby New York sanatorium where she could observe her care.  Mrs. Harwood was buried beside her husband in Newport News’ Greenlawn Cemetery. 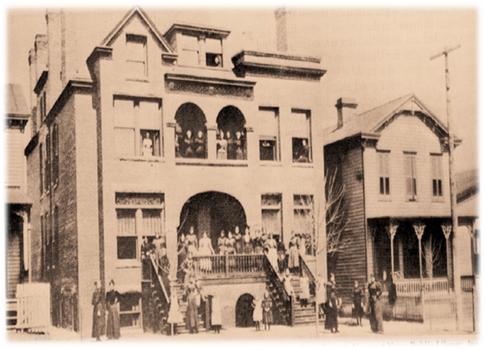 The Newport News Female Seminary. Located in the 200 block of 29th Street, this private girls’ school established by Mrs. Harwood, operated from 1894 to 1902. The Harwoods lived there until completing their new house at 5400 Huntington. Artwork of Norfolk and Vicinity 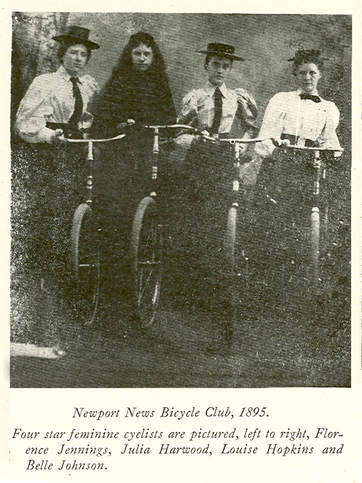 Julia Harwood Priddy as a young girl, second from left. Newport News Public Library System
Julia Harwood Priddy (1883-1946)
The Harwoods’ only child, she served as librarian at the seminary.  As a teenager, she briefly lived at 5400 until her marriage to insurance agent Capt. Lawrence Priddy and relocation to Manhattan, where she remained the rest of her life.  They had two children.  Julia divorced him in Reno, Nevada, in 1925.  At her mother’s death, she inherited 5400 and sold it to the Courtney family.  She died just three years later and lies next to her parents.

​Domestic Staff
To manage such a large household required servants - including those who lived on the premises and those who came on an as needed basis.  Warwick County census records of 1910 listed 19-year-old Scottish lass Hannah McCrae (maid) and 25-year-old Laura Dickens (cook) as occupants. The 1920 census indicated 39-year-old William Figg and 18 year-old Christina Hutchen had replaced them. 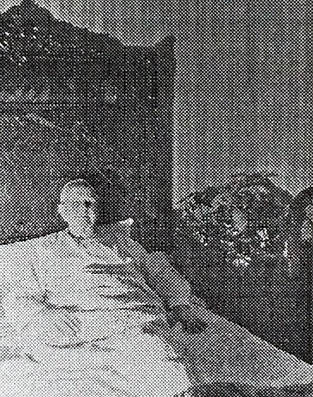 James Courtney.
James W. Courtney (1863-1952)
Mr. Courtney was a coal merchant and owner of many rental properties.  His family first lived at 5401 Huntington Avenue, directly across the street.  Always wanting a brick house, they bought 5400 from Julia Harwood Priddy in 1943.  After losing a leg to diabetes, the last 12 years of his life were spent as an invalid.  Unable to go upstairs, the dining room was set up as his bedroom and a toilet was installed in the kitchen pantry for his use.  He died in the house and like its first owner, W.W. Harwood, had his funeral there. 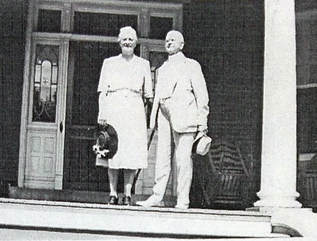 James and Maude Courtney standing on their front porch. 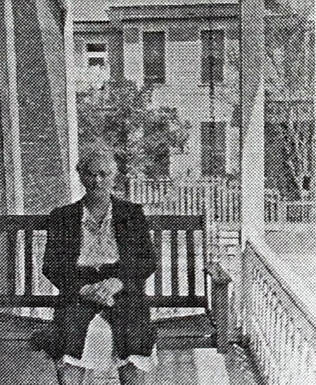 Maude Courtney on the side porch.
Maude Lena Courtney (1888-1964)
Second wife of J.W. Courtney and 25 years his junior.  They had one child, Emma, who despite her mother’s best efforts did not turn out well and became an alcoholic.  Maude was a homemaker; she lovingly raised her granddaughter “Little Emma” at 5400 during her formative years and tried to shield the child from her abusive mother.  In her final months, Maude went to live in a nursing home and died in her sleep.  She is buried near her husband in Greenlawn Cemetery. 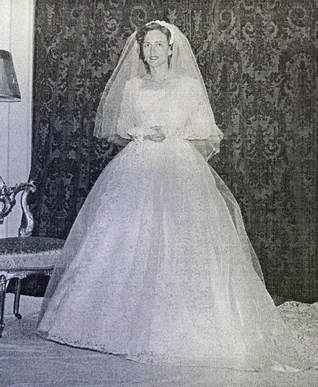 Emma Courtney modeling her first wedding gown in the front parlor. Note the gilt chair at left, originally part of the Harwood family ballroom furniture.
Emma Maude Courtney Kent Combs Warren aka “Big Emma” (1928-2013)
A beauty and the pampered child of a prosperous family, she studied music at William and Mary. Her first marriage to Austin Norman Kent was held at 5400.  This union produced a daughter, Emma Kent, known as “Little Emma.”  Because of her drinking, the marriage failed and “Big Emma” returned to live at home.  She was a difficult person and could only be controlled by her father.  After his death, she ran roughshod over her mother and the family finances, gradually selling off the properties, family heirlooms and, in 1963, the house.  She married two more times. In 1969 she was convicted of murder and served seven years in a women’s penitentiary.  Following release, she resided in Richmond, where she died of complications from Alzheimer’s disease.

Joe Theophilus Franklin and wife Mary Granthan Franklin
By the time of the Franklins’ ownership, the house was over 60 years old.  As one of the Franklin boys remembered, his father was constantly engaged in maintenance issues.  Under their occupancy the failing slate roof was removed, and the ballroom was subdivided to create two extra bedrooms for this large family, which had six children. 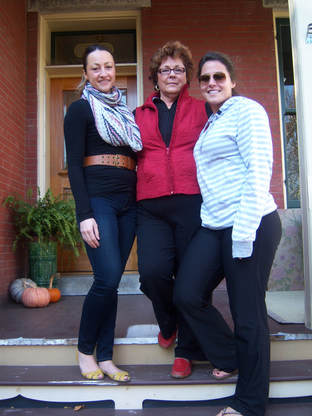 Vonnie Wray flanked by daughters Allie and Lauren on a return visit to 5400 in 2015.
J. Ashton Wray Jr. and wife Vonnie Piester Wray
Sisters Vonnie and Rita Piester grew up in North End on 57th Street, meaning they were familiar with the Courtney home from a young age.  Subsequently as a realtor, Rita sold 5400 in 1975 to dashing attorney Ashton Wray and his fashion conscious wife Vonnie.  During their occupancy, they were known for their luxurious lifestyle which included elegant parties in the handsomely furnished house.  They also raised two daughters here.  When their marriage faltered, they parted ways and sold 5400.

Carol Wray Walter 1993-1995
Carol Wray Walter purchased the house from her brother Ashton Wray Jr.  She, in turn, sold it in 1995 to investors Scott D. Templeton and Robert Mitchell Jr.  Five years later, Templeton ran out on the deal, and Mitchell bought the remainder of his share from Walter.